The first full week of January, Walt Disney World’s Marathon Week 2015 marked the return of the some of its most beloved races. The flagship event for runDisney reprised the same races and challenges that it held last year; the Pluto 5K Family Fun Run, the Minnie Mouse 10K, the Donald Duck Half Marathon, the Mickey Mouse Marathon, the 10th anniversary of the Goofy Challenge, and the second Dopey Challenge. I was lucky (or foolish) enough to be able to participate in my second consecutive Dopey Challenge. 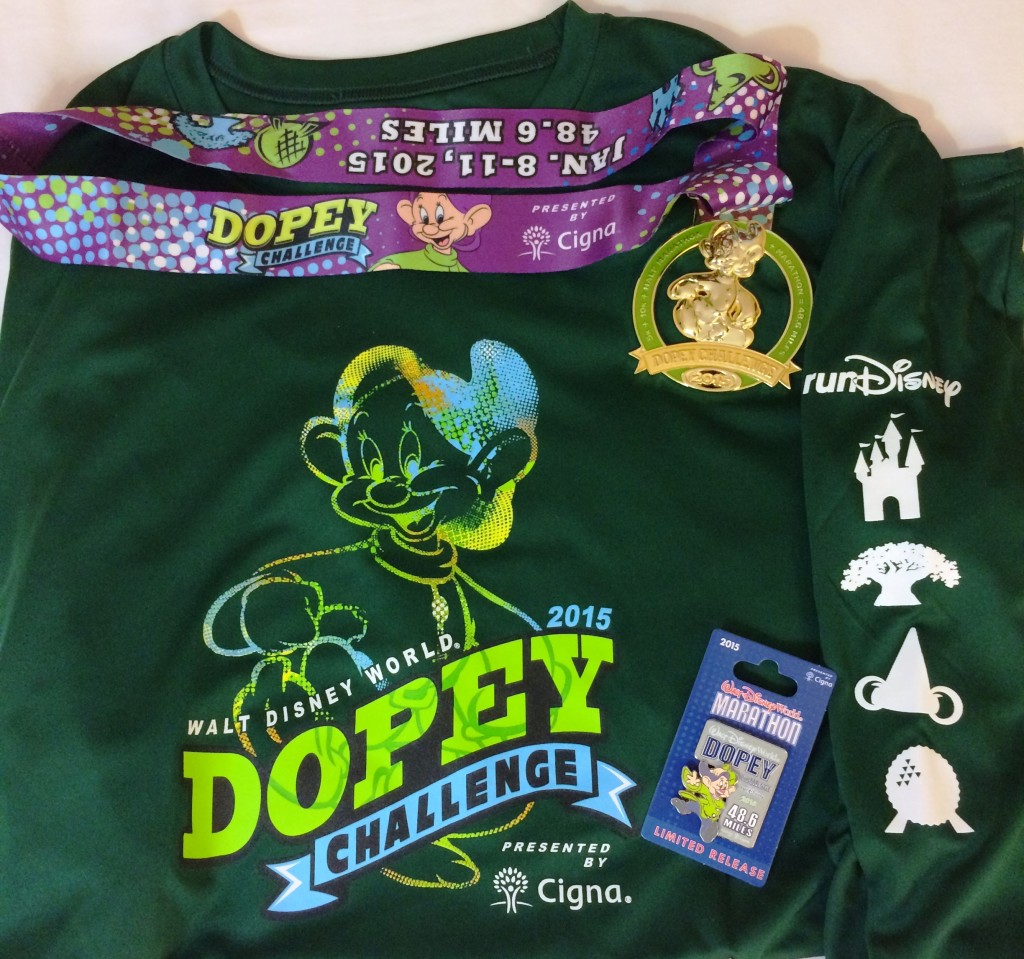 The weather for this year’s races was a bit chilly. Even as someone from the great frozen north, I felt that three of the four days were extremely cold. For both the 5K & 10K, I could barely use my hands to start the car they were so paralyzed with cold. On the day of the half, I couldn’t feel my hands until after passing the Mile 10 marker. I have been at Marathon Weekends where it has been much colder (it snowed and sleeted and the water stops turned into ice rinks), but this year was still brutal as compared to Marathon Week 2014. 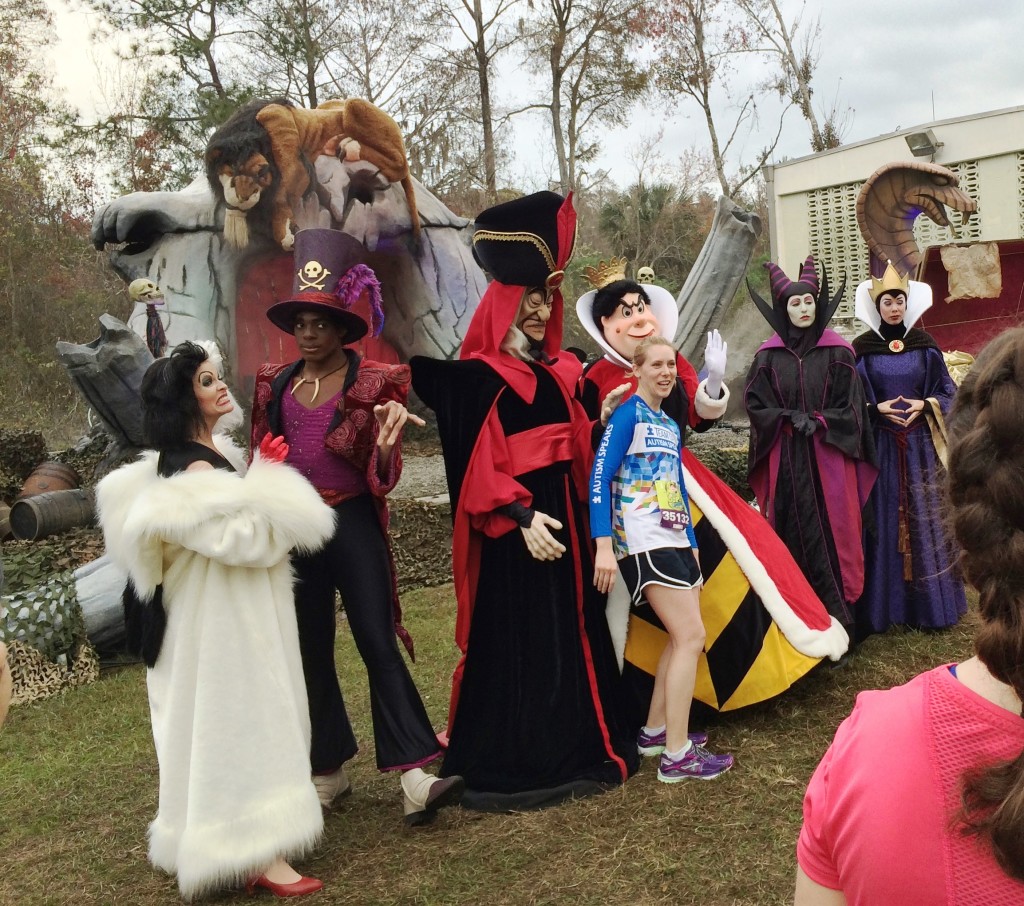 This year, because I dawdled and everything within my price range was sold out, I stayed off site. Last year, I made my reservations early and was able to book a room onsite. It’s been a while since I stayed off site at WDW. It was a different experience. My hotel was near OldTown on 192. Within a half mile, I had a half dozen fast food places, a Publix, two drug stores, two gas stations, countless souvenir shops and quite a few table service eateries, including a Waffle House adjacent to my lodging. It was certainly outside of the Disney bubble and the change was certainly noticeable. I enjoyed chatting with the ‘snow bird’ crowd that came to the hotel’s complimentary breakfast each morning.

I also chose to drive the 1200 miles to Walt Disney World this trip, instead of flying and renting a car as I did last year. It was nice to have my own car and be familiar with its capabilities and nuances. Part of the reason I chose the hotel I did was its location and the relative ease I would have driving to the start line each morning. Driving myself also afforded me a few extra minutes of sleep that my counterparts on property relying upon Disney event transportation were denied. I also had a ‘base camp’ from which I could huddle and gather warmth and hold post drink refreshments.

As to not run the risk of oversleeping, I moved the alarm clock from beside the bed to across the room. Last year I slept through my alarm for the 5K. Thankfully I had laid all my race gear out the night before and just had to throw it on and speed over to the start line. I walked into my corral just before it was released and was able to start and finish that race and the challenge with no complications. Thanks in part to hitting the sheets at a reasonable time and sleeping a decent amount and the alarm clock trick, I was at all four starts of the 2015 Dopey Challenge with plenty of time to spare. 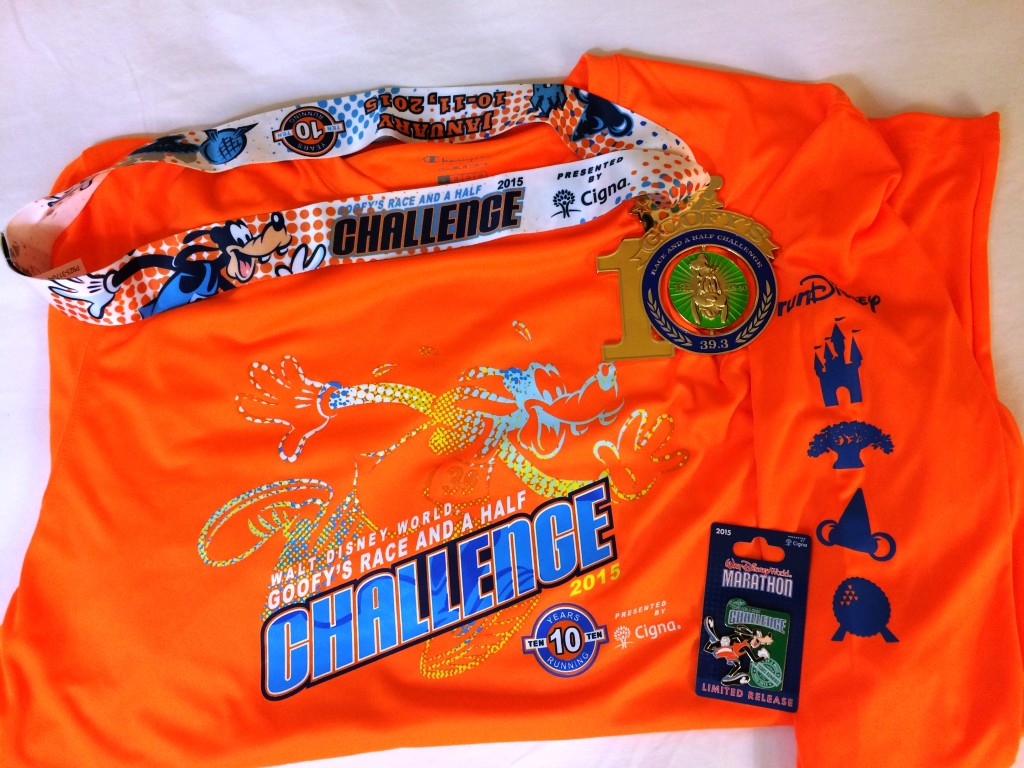 RunDisney had altered the 5K course slightly from other runs that have gone through Epcot and it was a welcome change to me. Instead of spending quite so much time running in the Epcot parking lot, they tweaked the course to include running into Future World West. 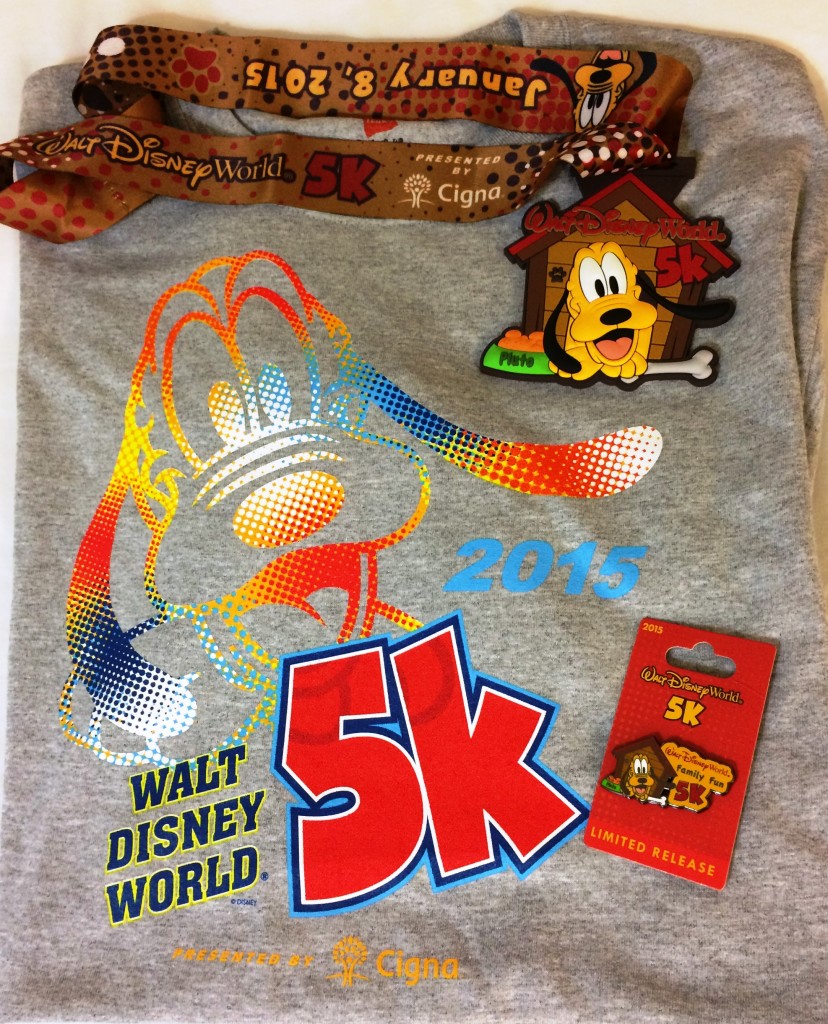 The course for the 10K and Half were pretty similar to how I remember it from 2014. The only difference I noticed with the full marathon was a little bit of rerouting in Wide World of Sports. No big character surprises or disappointments this year either. Pretty standard, with the exception of Anna and Elsa standing along the battlements of Cinderella’s Castle waving to the runners as they passed through for the half and full. 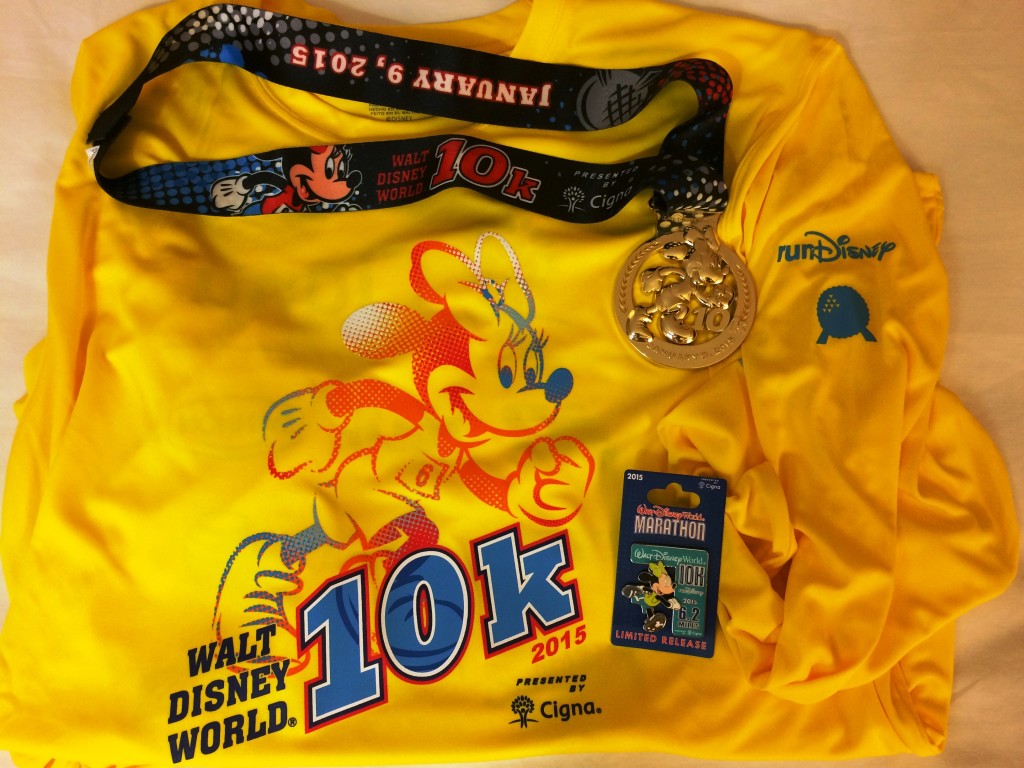 One thing that was very noticeable happened during the half marathon and full marathon. It was especially pertinent to those of us runners who maintain a little slower pace (tortoise or hare, run your own race). They ran out of gu. In my head, I know I should not rely upon any one else for my race, but I have become accustomed to getting a gu pack around mile 9 during a runDisney half marathon and multiple times during the full marathon. On Saturday, as I passed through the fuel station, the volunteers handed out the last packets of gu to the runners a few steps in front of me. I literally witnessed them pass out the last mocha and citrus flavors. It was a bit frustrating. Luckily I had an emergency spare in my hydropack and whipped it out and gulped it down. What bordered on the edge of infuriating was the amount of unopened gu packets that were strewn across the pavement shortly after the fuel station. On Sunday, the fuel stations were happily stocked with bananas and one had dry bars, but there was no gu until after Mile 20. I had used my stash during the half, so I was stuck behind the eight ball. As you passed the fuel stations, you could tell faster paced runners idly tossed unused gu packs on the ground ever more so than during the half. I learned my lesson the hard way. It is not something that I will allow to happen again. 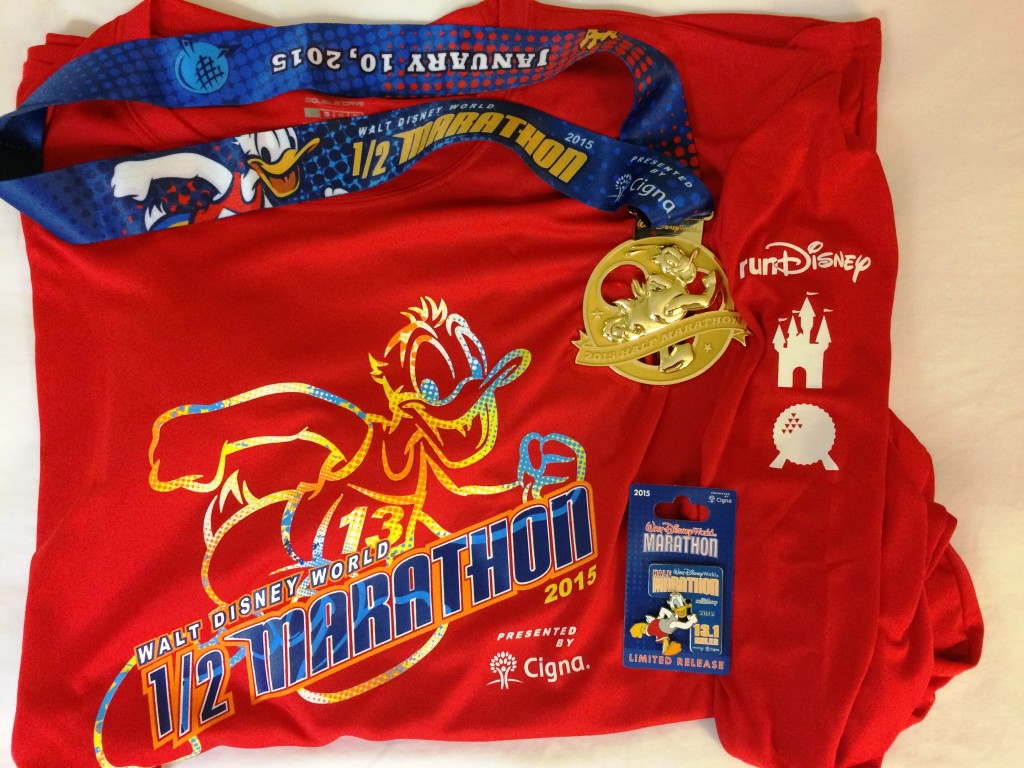 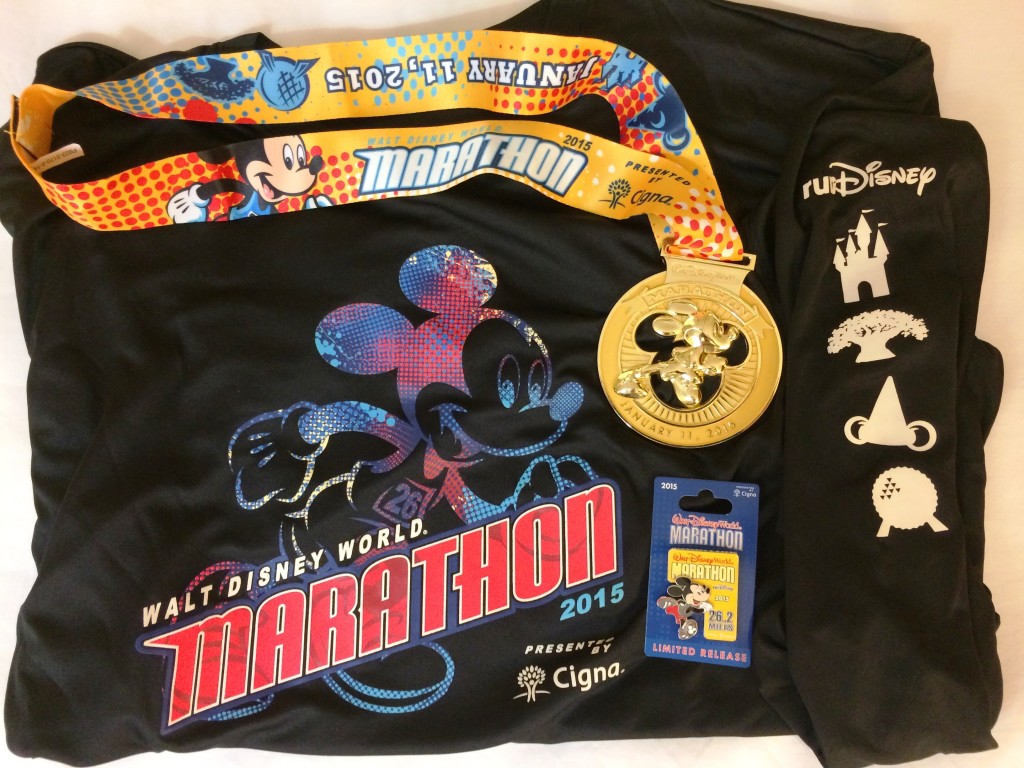 The medals for the Pluto 5K, Minnie 10K, Donald Half and Mickey Full are pretty similar to last year’s medals. The Dopey Challenge medal switched color a little. The Goofy Challenge medal however, did get a big spiffing up for its 10th anniversary. Not only was it more colorful, but it also added a spinner element and a little bit of Goofy humor, too. 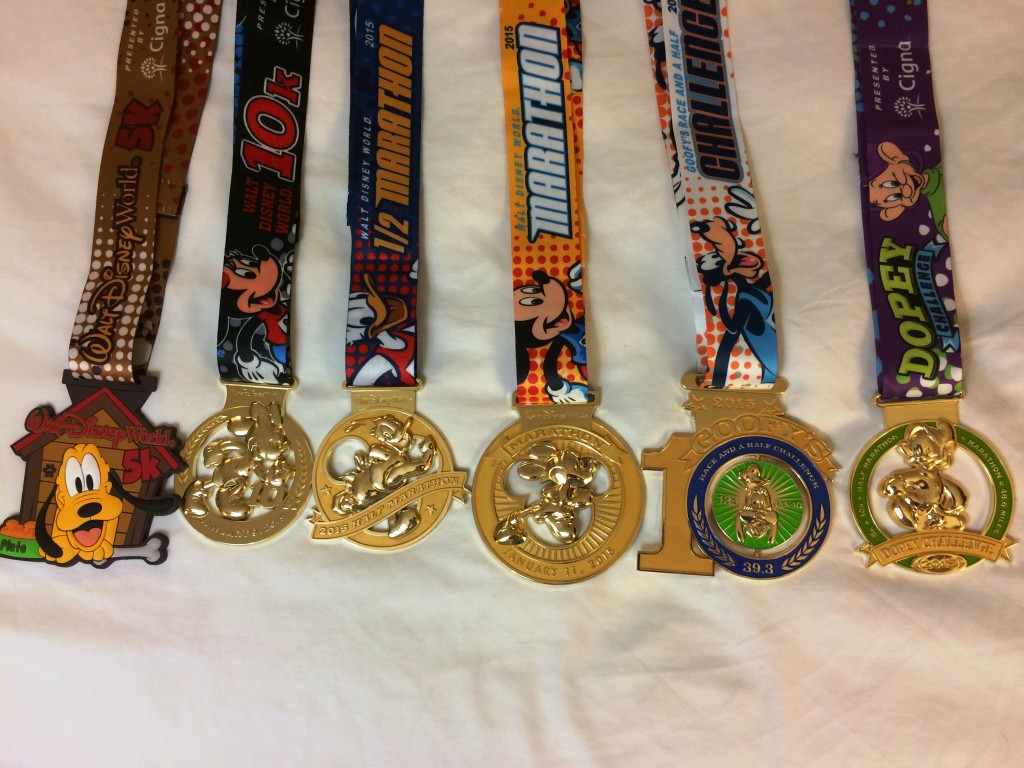 For the first time in my runDisney career, I had to visit the medical tent after a race. After completing the marathon on Sunday, I sat down in the parking lot to drink some water, eat a banana, tweet and text before waddling back to my car and going back to the hotel to freshen up. Once I had eaten my banana and drank my water, I tried to get up. I couldn’t. The paramedics came in their golf cart ambulance and hoisted me aboard and then whisked me away to be seen by medical professionals. After twenty minutes of more water and bananas as well as very painful stretching, I did my very best penguin impression and teetered back through the parking lot to my car. I continued to drink water and putz around until I was tired and ready to sleep for the night. Upon waking up in the morning, I was a little stiff but by the time I was dressed, my legs were back to normal and the only way you could tell I did a marathon the day before was the medal around my neck. 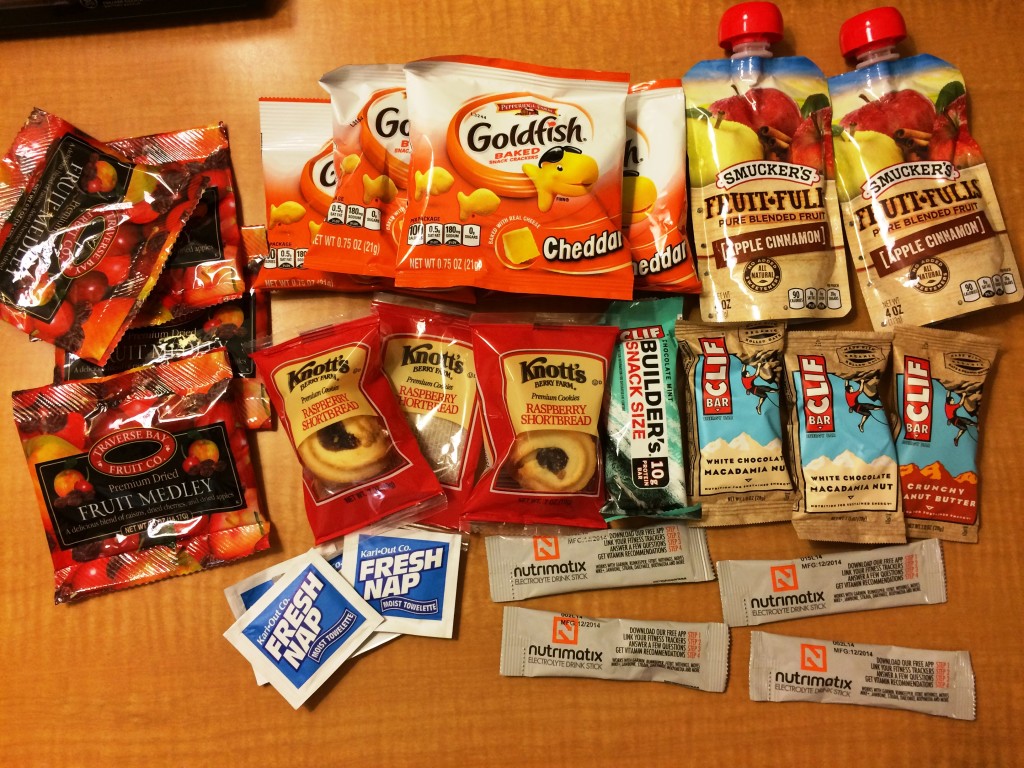 In 2014, I took part in the Runner’s World Challenge as part of my Dopey Challenge experience. This came with all the bells and whistles that runDisney has for Marathon Week. It included: a Pasta in the Park Party, post-race breakfast following the 5K & 10K, race retreat (food, beverage, seats, tables, bag check, character meet & greet, medic station, massage stations, more direct route to the corrals; all inside a temperature controlled tent) for the half and full marathons, a Runner’s World book and tech shirt. This year I did the bare bones Dopey Challenge. While I did enjoy the extra perks in 2014, I am not sure they are entirely worth the money (approximately double the price). If I chose to make it a three-pete in 2016, I may select a couple of the add-ons individually; specifically race retreat for the half and full.